Win both halves is a betting market that requires you to bet on a team to win in a specific game’s first and second half.  For example, a football game may end up being 3-0 with 1-0 in the first half and 2-0 in the second half, here the winning team has won both halves.

Win Both Halves Explained in Detail

With this bet, you need to wager on your chosen team to be ahead of its opponent in the two halves of the match. Essentially, you’re breaking down the game into two smaller ones, including the first and second half. For you to earn a profit from your bet, the team you choose must emerge the winner in both halves.

There are some essential factors to keep in mind when using this market. For example, you bet on Chelsea to beat Crystal Palace in an FA Cup final. Chelsea scores in the first half of the game, and the scoreline remains 1:0. When the second half starts, Crystal Palace scores an equaliser, and the scoreline stands until the end of the game, taking it to the extra time.

If Chelsea wins in the extra time or during the penalty shootout, your bet won’t win. That is because in the bookie’s mind, while Chelsea won the match, they didn’t win in the second half. This example illustrates two basic rules, which include:

Also, if the match officials cancel the game in the second half, your wager will be cancelled. Depending on your sportsbook’s rules, you will either receive your stake back or half of your profits if the first half result is correct.

A Practical Example of Win Both Halves Bet 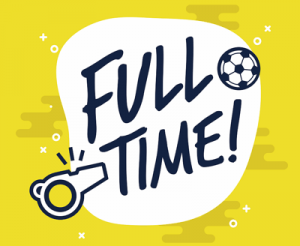 To deeply understand this market, you need a practical example, and here it is. Let’s assume that you have placed a bet on Manchester United to win both halves against Leicester City. Your wager won’t come through if Manchester United were to score a goal within the first ten minutes and saw the remaining part of the game out. Your bet is still successful with a scoreline of 1:0 in the first half.

In the eyes of the sportsbook, this wager automatically returns to 0:0 once the second half starts. Your wager will only come through if Manchester United scores and wins the second half. It means that Manchester United will have to net a minimum of two goals (1:0 first half and 1:0 second half) with Leicester City not scoring for you to earn the profit and get your stake back. If the final outcome stays 1:0 with neither team scoring in the second half, it’ll make for a losing wager.

All sports that include two halves provide you with the opportunity to place a win both halves bet. Predominantly, this market is available in football, but it is an excellent tool for enhancing your betting odds no matter the type of sport. Here is a list of the top sports where you can also take advantage of this market.

Many top sportsbooks offer two types of the win both halves bets. The two types require your selection to score more goals than their opponent at the end of each half, including injury time.

Home Win in Both Halves

This market allows you to wager on whether the home side will emerge the winner of the two halves. The victor is based on goals netted in both halves. For example, if Chelsea is playing Arsenal at their home ground, and the scoreline at the end of the first half is 1:0 and 2:0 at the end of the second half, your home win in both halves bet will win. A draw or win for the away team means that your bet won’t win.

Away Team Win in Both Halves

Away team win in both halves is the opposite of a home win in both halves. Using the Chelsea vs Arsenal example above, your bet will only win if Arsenal manages to win the first half (1:0) and then scores in the second half to make it (2:0).

How Is It Different from A Half Time/Full-Time Bet? 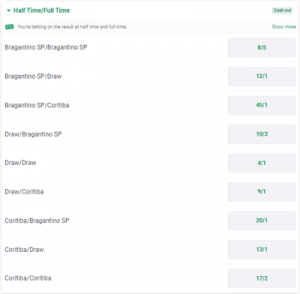 Various markets allow you to divide a game into two halves in terms of betting. Apart from winning both halves, HT/FT time is another popular market. While the half-time/full-time bet shares several features with a win both halves wager, it’s different. That is because when you place a bet on a given team to win two halves, the side you have backed must win both halves.

But if Manchester United is leading Leicester City 4:0 at half-time and in the second half, Leicester scores a goal, and the game ends 4:1, your HT/FT wager will win. But a win both halves bet will not come through.

How to Pick a Winner in a Win Both Halves Bet

One of the most important things to do before you can place a wager is to study and analyse the form of the competing teams. For instance, if you want to bet on Manchester United, check if they have won both halves in many previous matches.

Studying how teams have been performing in their previous games will provide you with a good indication of whether your selection will be successful or not. Other factors to keep in mind include home advantage and the opponent’s form.

The Benefits of Placing a Win Both Halves Bet

The main advantage of placing a win both halves wager is that you tend to get more competitive odds compared to when you simply back a team to win a game. Also, the market is available across many sports, so it is a perfect match for you if you love to wager on different events and competitions. On top of that, it gives you greater control, regardless of the market you pick to bet your hard-earned money on.

The bet’s guidelines and rules remain identical, so it is perfect for bettors looking to boost their online betting experience and bankroll without going into anything complicated. And above all, you can create an accumulator bet, enhancing your odds further.