Unseated rider means that a horse has thrown the rider from its back. This can occur just before the start of the race, during the race or even at the finishing line.  If a horse crosses the finish line without a rider it does not count in the finishing order.  Riders are no longer allowed to remount horses in UK racing after being unseated. 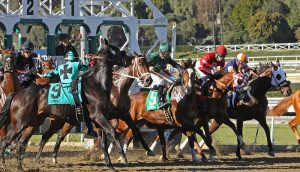 If you are a racing and sports betting enthusiast, you have already heard or come across UR next to your favourite horse on a racecard. UR denotes unseated rider, which happens when a horse is stripped of its jockey. That occurs when a horse jumps a fence, but it isn’t uncommon for a jockey to be unseated at the start or during a flat race (but can happen).

Under the racing rules, riders can remount their horses before a race starts if they are unseated. But as soon as they’re under the starter’s orders, riders are prohibited from mounting again on their horses. This rule was established in 2009 for safety.  Horses can be remounted still in Ireland.

One of the practical examples of an unseated rider is that of Irish jockey Tony McCoy. Tony won the strangest race in history after falling from his race. But he managed to win the race after taking a lift in a car and remounting after all other riders had fallen.

Other riders who remounted their horses after falling both fell again before reaching the finishing line at Southwell, Nottinghamshire. Tony McCoy is believed to be the first rider to win a race in which multiple horses unseated their jockeys, including his own.

Several factors can lead to horses unseating their jockeys, apart from fence jumping. One of these factors is a loose horse. A loose horse cannot only lead to falling of riders but also affect the whole competition. For example, in 2012, a loose horse running the wrong side caused stewards at Santa Anita to declare a race a no contest.

The horse was in good order but soon hesitated and jumped to the left, over the inside rail, unseating its rider, Alonso Quinonez. It continued to run the wrong side along the temporary inside rail via the clubhouse turn into the stretch. The race was declared a no competition since it was totally disrupted. 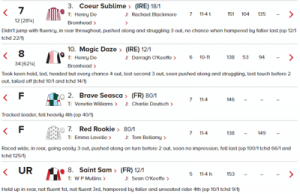 Rather than bewildering and confusing, a racecard’s function is to convey helpful and valuable information as much as possible succinctly and neatly. Racecards use letters to indicate important information about the profile of a given horse. The letters D and C represent distance and course, respectively. These letters help identify horses that have won at the racecourse in question before and at that distance.

A combination of C and D (CD) represents a horse that has won over the distance and racecourse. F and U are also important letters that a racecard has. P means a jockey has pulled up a horse, while S denotes a horse that has slipped. U and F represent an unseated jockey and a horse that has fallen, respectively. So if you want to know if a horse has unseated a ride in previous competitions, you should look for the letters U and F.

When it comes to betting, an unseated rider can affect your wager in one way or another. For instance, you can lose a money line bet if the horse you have backed unseats its jockey. If you want to be on the safe side, you must have faller insurance. Faller insurance is where your sportsbook refunds your initial stake if the horse you have backed is brought down or unseats its jockey.