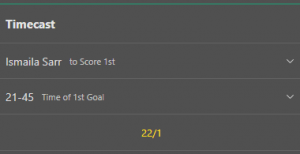 A timecast bet is another double bet on football games that continues to gain traction as players look for new and varied ways to wager on games. There are two elements to the bet, the first is a goal scorer, and the second is a time, with three different ways in which you can bet on the goal scorer.

The most common type of timecast bet is with a first goal scorer bet, but you can also place this with a last goal scorer or an anytime scorer bet on the game. Working out the time of a goal is certainly not easy, but if you think goals will come early or the game will be scoreless until close to the end, this is undoubtedly a bet you can use to back up those views.

Variations of a Timecast Bet 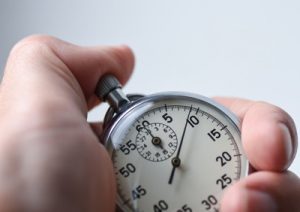 The two elements of this bet will both have variations attached to them that you can change, and those will determine the odds you receive on the bet.

The scorer is the first variation, you can choose to back your player to score first, last or anytime here, though anytime scorer bets are quite tricky for this market, so it is usually one you use with first or last. This is because most people are betting based on thinking there will be an early goal or late goal in the game.

Secondly, it is worth looking at the time element of this bet too. Bookmakers don’t have to offer the same with this. Some will give smaller windows for the time, which mean bigger odds, while others will give bigger windows of time, which means more chance of the bet winning.

When you are placing a timecast bet, you need to compare the times, as well as the odds, to see which bookmakers give you the best value on your bet.

Examples of a Timecast Bet

Below you will find some examples of timecast bets and how they work.

In this game, you think Harry Kane will get a goal, and there will be early goals in the game, as both times like to start fast.

Timecast bets you could place on this game are as follows:

Based on your thoughts about this game, you have two main options to go with. If you want bigger odds, you can go for Kane to score the first goal and score it early. However, if you are worried about multiple early goals, you can cover yourself by simply backing Kane to score anytime within the early time period.

In this game, you think things will be very tight, and goals will not come until the end of the game. However, you want to find value, so go with a bookmaker that offers smaller time frames for the bets, as you want to bet at bigger odds.

Timecast bets you could place on the game with this in mind are as follows:

These three options all give you a very small timeframe at the end of the game where the goal needs to come. That will mean the odds are already high, which is good, and choosing what goal you want Mason Mount to score will determine just how high the odds are. Anytime will give the smallest odds, followed by last goal, and finally, the first goal coming so late in the game will provide you with the biggest odds with this bet.

Advantages of a Timecast Bet 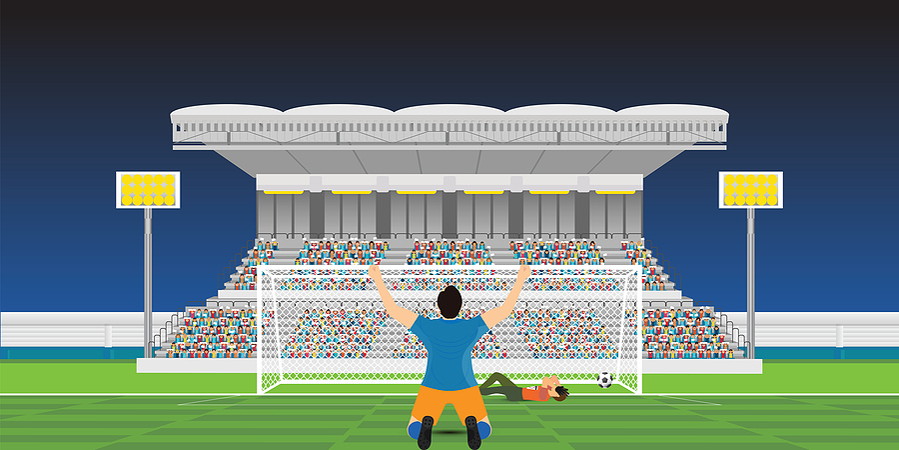 Like any other bet, there are many rules to understand, which can affect your bet, so just like anything else, you need to make sure you understand the basics of the bet before you get going.

Do Own Goals Count?

No, as per the standard rules around goal scorer bets, these need to be goals for the team, and own goals do not count. This means if the first goal in a game is an own goal, then the second scorer would be considered as the first goal scorer for betting purposes.

What if My Player Doesn’t Play?

The basic to remember for this bet is you need to have a run for your money. If your player does not play or is not on the field in time to score the first goal (for example, he comes on when it is 2-0), then your bet is void, and you will receive your money back.

A scenario where you bet would count would be if you back your player to score anytime or the last goal, and he comes onto the field. Then, it would depend on him being on the pitch at the allotted time you have chosen. For example, if you back a player to score anytime between minutes 80 & 90, and he comes on to play the full second half, your bet would stand, even though he wasn’t on in the first half.

Can I Place a Normal Double Instead of a Timecast?

This is not available because the two bets impact each other, which the industry calls related contingency. For example, if you are choosing Harry Kane to score anytime, then if he scores a goal in the game (part one of the bet up), it means that one of the times has to be correct, so the odds of all times are lowered based on that.

The opposite way round, if you get the time right, it is related to Harry Kane because there is a goal in that period, meaning no goal isn’t an option, so the chances of him scoring that goal are also shortened.

Odds for a timecast will be shorter than if you were to place a regular double on both things to happen, but that is because the odds of them happening together are shortened if one happens.